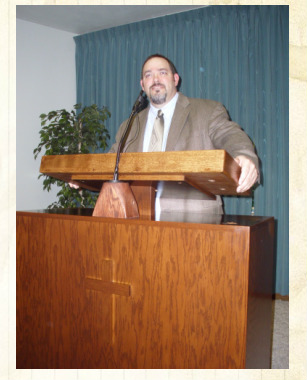 The Lord's Church was established in Roseburg shortly after the turn of the century. In about 1914, property was purchased for a church building with a brother Patterson and brother Badger signing as trustees. Just how long they had been meeting before that is uncertain. A small building was erected in the south part of town near the corner of Roberts and Cobb street. But through death, relocation and other causes, the group suffered losses such that through lack of leadership, they ceased meeting in the late 20s.

In 1937, O.B. and Grace Digby moved to Roseburg with their children, Denton Talburt, Jean Talburt and Keta Digby. Upon arriving in Roseburg, and finding no congregation available, they worshipped in their own quarters for a couple of weeks. Then they placed an ad in the paper seeking other members of the church of Christ interested in joining them for worship. Responses came from Myra Roberts and Brother Bradford. Arrangements were made to meet the next Sunday, December 5th, in Leslie Roberts home, located at 1527 SE Pine Street. Included in this group, were two members that had been part of the earlier work; Brother Bradford and Sister James.

Prior to 1937, the property owned by the first congregation had become subject to taxation because of disuse; for this reason it had been sold at a sherriff's auction. The new congregation met briefly in the Robert's home before moving to larger facilities, including a number of rented facilities.

In 1944, the property at the west end of Oak Street Bridge was bought and remodeled for use as a church building. It was used until 1963 until it was sold, and a new building was raised. The new building was constucted on Garden Valley Blvd, but the church had to rent space to gather at the Douglas County Fair Grounds until completion. In May, 1964, the new building was finally able to be occupied. The structure contained 15,000 square feet of floor space, 14 classrooms, and an auditorium seating capacity of 375 people. It is situated on a 3 acre parcel of land, located in the heart of Roseburg's business district.

By 1945, had successfully moved onto to become a fully self-sufficient congregation.

The following men have served as ministers for the Garden Valley Church of Christ: